Did you ever see pigs being raised on concrete floors? Concrete floors have a terrible impact on the muscles, tendons, cartilage and bones of the pig . When pressure and shear stresses are applied to the rapidly growing legs of pigs, some awful things happen. Cartilage gets damaged and is replaced by fibrous tissue. This in turn produces shortening and bending of bones. Cartilage splits and form fissures in pigs as young as two months of age. Fractures might occur in the knee and elbow joints. Hip, knee and elbow joints often become inflamed. Knees might bend inwards, and front feet might rotate or twist. In most cases healthy angulation of the leg bones disappears, and legs straighten out in an abnormal way. Pigs tend to walk on their front toes in a stiff goose-stepping fashion. Pigs often suffer infections such as bush foot and foot rot . Many of these problems become irreversible in pigs as young as six weeks of age. High levels of vitamin A, high levels of lysine, high stocking densities and the use of growth hormones, leanness drugs and sedatives – all aggravate the situation. Pigs are under constant stress and pain.

Concrete floors are needed in order to flush waste to biodigesters. But no amount of biogas could ever justify the stress, pain and filth under which pigs are forced to live. When pigs are brought to slaughter after having spent four months on concrete floors, they have great difficulty walking. Some are lame. “Lameness is the 3rd most common cause for treatment with antibiotics in weaner and finishing pigs” (Lameness in Pigs). You read that correctly: even weaner pigs become lame. Pigs should never be housed on concrete floors.

Did you ever go near a conventional pig pen with a concrete floor? Downwind from a pig farm over one kilometer away, one can smell it. This is easy to understand. Ammonia emissions from conventional pig pens typically reach high concentrations, if not constantly vented and regularly flushed. “At moderate levels of concentration, ammonia can irritate the eyes and respiratory tract; at high concentrations, it can cause ulceration to the eyes and severe irritation to the respiratory tract”. (Ammonia Emissions and Safety)

Pigs raised in the conventional way often suffer from diarrhea, and at times they defecate uncontrollably while eating. This puts watery fecal material just about everywhere on the concrete floor of the pen. Flushing the concrete floor of a pig pen with water does nothing to control pathogens. In fact, flushing aerosolizes ammonia and fecal matter, and aerosolized waste might contain a large number of bacterial and viral pathogens (Flu Farms). Biofilm inevitably covers the surface of the concrete floor, and no amount of flushing can remove this sticky slime. “About 99% of the world’s population of bacteria occur in the form of a biofilm” (AN INSIGHT INTO BIOFILM ECOLOGY AND ITS APPLIED ASPECTS).

MRSA, Salmonella, E. coli, Clostridium difficile and many other pathogenic bacteria thrive within biofilm (Prevalence of Biofilm Formation Among Methicillin Resistance Staphylococcus aureus Isolated From Nasal Carriers and Salmonella Biofilms Extremely Resistant to Disinfectants and Salmonella Biofilm – A Sticky, Dangerous Problem and Role of bacterial cell surface structures in Escherichia coli biofilm formation). Bacteria within biofilms at times can be a thousand times more resistant to antibiotics than unattached bacteria (Antibiotic resistance of bacteria in biofilms). After only seven days of biofilm growth on a new concrete slab, it’s impossible to remove biofilm even by means of intense scrubbing with disinfectants. The concrete floor of the pig pen becomes a perfect breeding ground for antibiotic-resistant bacteria and the proliferation of their antibiotic resistant genes.

Wherever pigs are raised on concrete floors as in large industrial piggeries, we can expect to see the spread of MRSA infection. In Holland, the MRSA carriage rate among pigs is 39% (An Investigation of the Carriage Rate of Methicillin-Resistant Staphylococcus aureus in Pigs in the Western Province of Vietnam). In the USA, the MRSA rate among pigs is 49%. In Belgium, the rate is 63% (Prevalence and antimicrobial susceptibility of methicillin-resistant Staphylococcus aureus among pigs in Belgium). In Denmark the MRSA rate is 66% (Revealed: MRSA variant found in British pork at Asda and Sainsbury’s). In Germany the MRSA rate can be as high as 70% (Prevalence and molecular characteristics of methicillin-resistant Staphylococcus aureus (MRSA) among pigs on German farms and import of livestock-related MRSA into hospitals). MRSA has now been found in UK pork.

MRSA, of course, it not just confined to pig pens, as we see in this picture. “MRSA is highly prevalent in hospitals worldwide” (Global epidemiology of MRSA). At 74.1%, Vietnam has one of the highest MRSA rates within hospitals in Asia (Spread of methicillin-resistant Staphylococcus aureus between the community and the hospitals in Asian countries), and swine flu is quite common (Swine Flu Kills Three More in Vietnam and  Ho Chi Minh City on brink of swine flu outbreak). 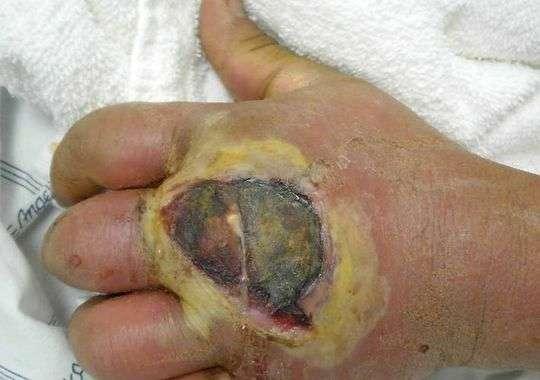 “An ESBL-producing E.coli strain, which is said to be harder to treat than MRSA, now infects about 30,000 people annually in England and Wales (Antibiotic Resistant ESBL-Producing E.coli Strain Spreading In UK). The prevalence of the highly lethal ESBL/pAmpC-producing E. coli in pork meat in Saigon is 34.5% (Dissemination of Extended-Spectrum β-Lactamase- and AmpC β-Lactamase-Producing Escherichia coli within the Food Distribution System of Ho Chi Minh City, Vietnam). Here we see that the E. coli contamination of pork and poultry meat in Vietnam has reached 100%:  . In hospitals in Singapore, 30% of the patients who contract ESBL-producing E. coli die.

In hospitals in Singapore, 30% of the patients who contract ESBL-producing E. coli die. Pig farmers in Vietnam have nothing to learn from conventional pig farmers in Holland, the USA, Belgium, Denmark, Germany and the UK or just anywhere else in the industrialized world.

When pigs lie down to rest or sleep in a conventional pig pen, they inevitably come into contact with fecal and urine residue as well as the biofilm that covers the concrete floor. Biofilm loaded with pathogens covers the hair and skin of the pig. Cuts and bruises from anti-social behavior become easily infected. Skin diseases, rashes and concrete-induced sores are commonplace. One often sees hundreds (sometimes thousands) of filth-bearing flies on the pigs and throughout the pen. Pigs are continually twitching due to the annoyance and discomfort caused by flies. They scratch against the filthy biofilm-covered floor and walls of the pen. Pathogens thrive within such a filthy setting.

One might be surprised to find out that some viruses also form biofilms (Can viruses form biofilms?). “We propose that, similar to bacterial biofilms, viral biofilms could represent ‘viral communities’ with enhanced infectious capacity and improved spread compared with ‘free’ viral particles and might constitute a key reservoir for chronic infections.”

On the WHO list of viruses most likely to cause a global pandemic, there is a new virus called Nipah. The Nipah virus appeared on hog farms in Malaysia when farmers began to pack pigs into tight quarters and industrialize production: “When you have thousands and thousands of pigs on one farm, there’s a seemingly endless supply of new piglets to infect. The pig factory becomes a virus factory. The Nipah virus spreads like wildfire through the whole farm. Hops to another farm. And eventually jumps onto farmers” .Within a day of contracting the Nipah virus, the brain of the infected person swells up, and the mortality rate is about 50%.

Even in the United States, the meat produced is dirty meat . Operating an industrialized pig farm where pigs are raised on concrete floors is an expression of pure barbarism.

The onset is gradual. The pig shows abnormal leg conformation and gait with or without stiffness and pain. The temperature remains normal and joints will not be swollen unless there are fractures.

Abnormal gaits arise either from pain in the joints or abnormal movements in the hind legs from the hips which give a swaying motion. The pain is associated with damage to the sensitive membranes around the joints resulting from either splitting or erosion of the cartilage in the joints or movement of the growth plates. Some pigs however may show severe clinical signs yet on post mortem examinations the joints appear normal and vice versa. Joints may become inflamed (arthritis), particularly in the hip, knee and elbow. OCD may be seen within three months of gilts being introduced on to the farm, during their first pregnancy, in lactation or in the first 2 to 3 weeks post weaning.